This year Georgia will be guest of honor at Frankfurt Book Fair. The National Bank of Georgia has decided to respond to such a significant event and to issue a collector coin in denomination of 5 Lari dedicated to the -"Georgian Book".

"Frankfurt Book Fair is one of the biggest book fairs in the world, which has thousands of international visitors every year and is the focus of numerous international journalist and critics.

Within the frameworks of the event, every year one particular country is eligible to represent its intellectual resources (literature, theater, music, painting, movie, folk music, cuisine and etc.) during the year throughout different cities of Germany; Georgia will be the guest of honor in 2018.

Realization of coin will begin from September 10, 2018 the sale price is 75 GEL and the coins will be available at the Cash Centre of the NBG (address: 72 Kakheti Highway, Tbilisi), Money Museum (Kvareli, Rustaveli str. N10) and from the online store on the NBG webpage.

The obverse:   The composition of the coin is based on the Luke evangelist, depicted on one of the miniatures of Gelati (XII century). Stylized fragment of the Nuskhuri text from the Georgian manuscript book with the first upper letter colored in red and blue, is represented on the right upper side of the coin, while Latin and Asomtavruli lettering is placed under the text: "Romae MDCXXIX", and „Ⴒ Ⴔ Ⴈ Ⴊ Ⴈ Ⴑ Ⴈ Ⴙ Ⴖ Ⴇ", „Ⴙ Ⴖ Ⴇ" (accordingly, "Rome, 1629" and "Tiflisi, 1709"). The following round inscriptions are placed along the left part of the coin arc: „საქართველო 2018 Georgia". 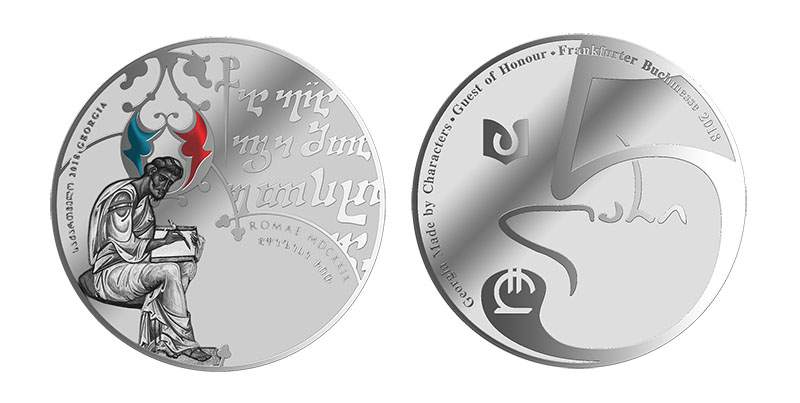 The Reverse: Logo of  participation of Georgia in the International Book Fair of Frankfurt, depicted on the upper left part and denomination value "5" with the symbol of Lari "₾", bring together the overall composition. The center of the coin features name of the national currency "ლარი"performed with stylized letters. The following round inscriptions are also placed: "Georgia Made by Characters. Guest of Honour. Frankfurter Buchmesse 2018".