20 February, 2019
Financial Stability Committee of the National Bank of Georgia made a decision to leave the countercyclical buffer unchanged, at 0%. The National Bank of Georgia analyzes and monitors systemic risks induced by credit growth. After the excessive credit growth reported in the previous quarters, which has repeatedly been emphasized by the Financial Stability Committee1, the annual growth of credit portfolio decreased by 0.5 percentage point in January, 2019 and reached 16.7% excluding the exchange rate effect. However, Credit-to-GDP ratio still exceeds its long run trend2, mainly due to household loans. According to the Committee's assessment, enacting the limits on Loan to Value (LTV) and Payment to Income (PTI) coefficients and imposing the restriction on FX borrowing under 200 000 GEL will reduce lending growth to a sustainable level in the medium term. 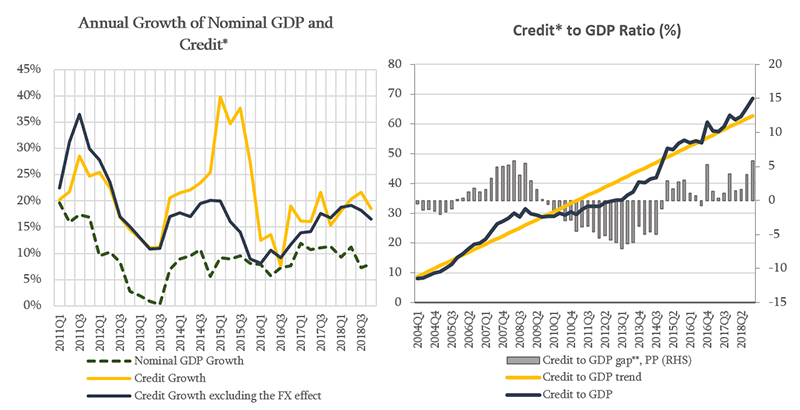 ** Credit-to-GDP gap is the deviation of Credit-to-GDP ratio from its long-run trend. The trend is estimated using HP filter in line with the Basel recommendations

Implementation of the responsible lending framework, that has been enacted since January 1, 2019, will ensure reduction of financial stability risks and will have a positive impact on the economy. This regulation will reduce excess credit burden and long run interest rates, which will contribute to sustainable economic growth in the medium term. It should be noted that responsible lending regulation is introduced in consistence with Euro Directives. In the recent years, the similar regulation has been implemented in countries such as Estonia, Hungary, Sweden, Denmark, Lithuania, Czech Republic.

According to the committee's assessment, Georgian financial system remains resilience against potential shocks. The banking sector is highly capitalized and liquid, and maintains high profitability indicators, while share of non-performing loans in total credit remains low. However, it should be noted that usually in the ascending credit cycle the share of non-performing loans decreases. Therefore, this indicator should not be interpreted too optimistically.

In line with slowing global economic activity and increased regional risks3, external risks prevail. Given these circumstances, growth of foreign currency loans should be treated with additional caution. In order to mitigate external risks and increase the buffers, the Financial Stability Committee recommends the Monetary Policy Committee to consider increasing reserve requirements on funds attracted in foreign currency by 5 percentage points.

The Financial Stability Committee's next meeting will be held on May 29, 2019.

1https://www.nbg.gov.ge/uploads/fsc/desicions/eng_fin_stab_november.pdf
2The long run trend estimate is based on the methodology recommended by Basel Committee.
3https://www.imf.org/en/Publications/WEO/Issues/2019/01/11/weo-update-january-2019