As a result of the financial stability policy measures implemented by the National Bank of Georgia, financial system maintains stability and is able to continue lending to the economy in 2021 as well. As of the beginning of 2021, banks have solid capital and liquidity buffers. Despite experiencing significant pandemic-related credit losses, the banking system closed 2020 with a small, but positive profit. Since the beginning of 2020, the share of non-performing loans has increased by 3.9 pp and currently stands at 8.4%. However, the process of asset quality evaluation continues and, considering the severity of the pandemic-induced shock, it is expected that in the first half of 2021 the NPL ratio will increase to 10%. This expectation is based on the baseline scenario and the banks have already created appropriate loan loss reserves. Consequently, additional negative effects on banks' financial positions, in this regard, are not expected. Therefore, according to the Committee's assessment, in 2021, the banking system will maintain stability and will continue lending to the economy without any difficulties.

The Financial Stability Committee will discuss recovery dates of capital buffer requirements, which were released in March, 2020. As stated in the Financial Stability Committee's previous decision, reasonable time will be given to the banking sector to re-accumulate capital buffers gradually, without facing significant hardship. More precisely, banks will be given 1 year after the announcement of the decision to restore the currency induced credit risk (CICR) buffer, and 2 years to meet the conservation buffer requirement. Additionally, as planned, the new rates for the concentration and the net GRAPE buffers will be activated from March, 2021, while systemic buffer requirements will also be increased from the end of 2021 as scheduled. Considering existing capital buffers in the banks and their expected profitability, the recovery of previously released capital buffer requirements is not expected to have significant impact on lending growth.

The Financial Stability Committee of the NBG decided to leave the countercyclical capital buffer unchanged, at 0%. The annual growth rate of credit portfolio in January 2020, excluding the exchange rate effect, amounted to 8.9%, which is mainly driven by the growth of business loans. It should be noted that Credit-to-GDP ratio exceeds its long run trend, which reflects the high credit growth and exchange rate effects in previous periods. In Georgia, compared to peer countries, the existing level of Credit-to-GDP ratio is relatively high, which, together with the increased gap, indicates an increase in debt burden and vulnerability. Considering that in Georgia, compared to Eastern European countries, average interest rate is relatively high and loans are relatively short-term, the effective debt service burden in Georgia is even higher. Therefore, it is important to have the economic and loan growth rates consistent with each other. The loan growth should promote sustainable economic growth and welfare of the population, without accumulation of financial stability risks. According to the Committee's assessment, after the spread of the second wave of the Covid-19, credit activity slowed down and if this tendency continues, the growth rate of loan portfolio is expected to be around 7.5% by the end of this year. Accordingly, currently there is no need to activate the countercyclical macroprudential instruments.

*** Credit-to-GDP gap is the deviation of Credit-to-GDP ratio from its long-run trend. The trend is estimated using HP filter in line with the Basel recommendations. 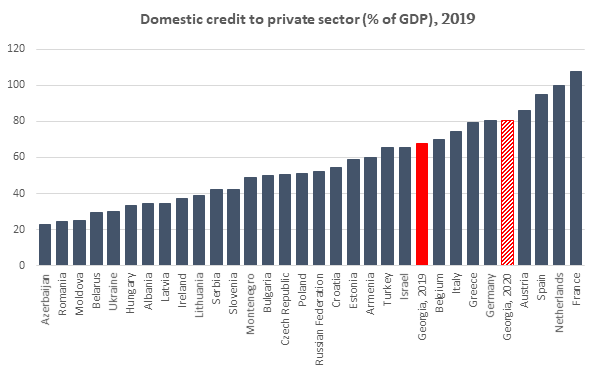 It should be noted that from the current perspective, given the magnitude of the pandemic can be better assessed, the potential impact of the shock on the financial sector is already largely realized. However, significant uncertainty remains, including the dates of vaccination and the duration of the pandemic. The National Bank of Georgia continues monitoring the country's financial stability and assessing domestic and foreign risks. If necessary, it will use all available instruments to minimize the possible risks.

The Financial Stability Committee's next meeting will be held on June 2, 2021.