Financial Stability Committee of the National Bank of Georgia made a decision to leave the countercyclical buffer1 unchanged, at 0%. Since the regulation of responsible lending to natural persons came into force this January, the growth of loans has been following the expected tendency. The annual growth rate of credit portfolio declined and in April 2019, reached 13.1%, excluding the exchange rate effect. However, Credit-to-GDP ratio still exceeds its long run trend2, mainly due to exchange rate effect and the excessive credit growth in past periods. According to the Committee's assessment, the lending growth will converge to its sustainable level in the medium term. The National Bank of Georgia continues to assess the impact of regulation on the credit portfolio growth, including the mortgage loans. 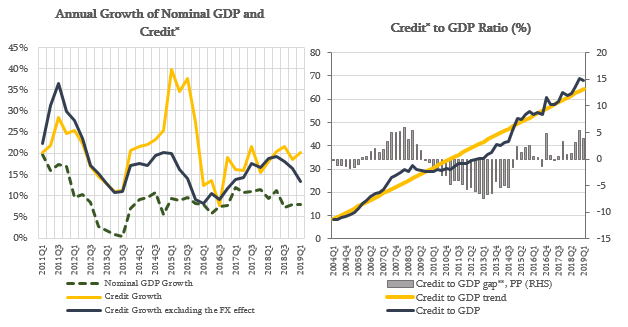 *Credit includes loans directly issued by commercial banks and microfinance institutions as well as bonds issued domestically by the non-financial sector m
**Credit-to-GDP gap is the deviation of Credit-to-GDP ratio from its long-run trend. The trend is estimated using HP filter in line with the Basel recommendations

According to the Committee's assessment, the implementation of the responsible lending framework that has been enacted since the beginning of this year, reduces the financial stability risks. Besides the slowdown of excessive credit growth, the positive tendencies have also been revealed. In particular,

the LTV and PTI coefficients have been improving, and as a result, the loans with high credit burden have been decreasing. As for lending to individuals, consumer loans continue to decrease, while mortgage loans, after the slowdown at the beginning of the year, are characterized by an upward trend, in which, the contribution of domestic currency loans has been increasing. In the light of reduced consumer loans, the resource for lending to legal entities is increasing. In April, the annual growth rate of loans to legal entities amounted to 12.8%. Moreover, the interest rates on domestic currency loans have shown the decreasing tendencies, which can support economic growth.

Georgian financial system remains resilience against potential shocks. The banking sector is highly capitalized and liquid, and maintains high profitability indicators, while share of non-performing loans in total credit remains low. However, it should be noted that usually in the ascending credit cycle the share of non-performing loans decreases. Therefore, this indicator should not be interpreted too optimistically.

The Financial Stability Committee's next meeting will be held on September 18, 2019.

1The countercyclical capital buffer is one of the most important macroprudential policy instruments. Its goal is to protect the banking sector from systemic risks arising from excessive credit growth.
2The long run trend estimate is based on the methodology recommended by Basel Committee.