21 December, 2017
In accordance with the Decree of the Governor of the National Bank of Georgia, amendments have been introduced in the regulations relating to capital adequacy requirements. Abovementioned changes include amendments to "the Regulation on Capital Adequacy Requirements for Commercial Banks" and introduction of new requirements through following normative acts: "Additional Capital Buffer Requirements for Commercial Banks within Pillar 2", "Determination of the Countercyclical Buffer Rate" and "Identification of Systematically Important Banks and Determining Systemic Buffer Requirements". The purpose of these amendments is to improve the quality of regulatory capital of banks and achieve better compliance with Basel III framework and international standards.

Furthermore, besides abovementioned changes, banks are required to hold additional so called Combined Buffer through Common Equity Tier 1. The combined buffer consists of the conservation, the countercyclical and the systemic buffers. Rate for the conservation buffer has been set at 2.5% of risk weighted assets, while 0% rate has been set for countercyclical buffer. The countercyclical buffer can vary within the range of 0 % to 2.5 % and shall be reviewed periodically based on financial and macroeconomic environment. For systematically important commercial banks the systemic buffer has been introduced. In particular, the Financial Stability Committee of the National Bank of Georgia discussed the methodology of identification of systematically important banks and determining additional capital requirements for them. Therefore, based on the Decree of the Governor of the National Bank of Georgia the normative act has been approved on "Identification of Systematically Important Banks and Determining Systemic Buffers". As a result, the systemic buffer rates and compliance timeframes were set for systemically important banks defined by NBG.

Introduction of the systemic buffer is an international practice, which aims to:

Abovementioned factors become more important in Georgian banking system due to a high level of concentration.

In assessing systemic importance of individual commercial banks NBG considered recommendations of the Basel Committee on Banking Supervision (BCBS) and the approach adopted by the European Banking Authority (EBA). Furthermore, considering existing financial sector characteristics and country specific factors in terms of challenges of availability of funds, NBG slightly adapted the methodology. For this purpose, several criteria were chosen with applicable weights, presented in the Table N1 below.

According to each indicator presented in the table, commercial bank's proportion in the system is multiplied by the presented weights and obtained scores are summed to determine a general score for individual banks. Based on the methodology presented, as of January 1, 2017, distribution of commercial banks' systemic scores is the following: 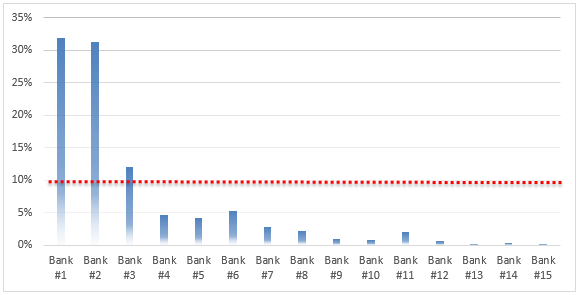 In the current period, banks were identified as systematically important if their cumulative score exceeded 10%. Systemic buffer has been introduced for them, which should be fulfilled through Common Equity Tier 1. Systemic buffer is expressed in percentage points without considering currency induced credit risk exposures. Systemically important banks should comply with additional capital buffer requirement gradually as presented in the Table N2.

The National Bank of Georgia will continue observing the dynamics of the market and if the banks' systemic importance changes  in accordance with presented methodology, within the same supervisory approach, a bank's systemic importance and relative systemic buffer will be changed.

In accordance with Basel III framework, commercial banks within the framework of Pillar 2, should hold capital adequacy buffers for those risks that aren't sufficiently covered under Pillar 1. With the objective to formalize and establish this framework National Bank of Georgia introduced "Rule on Additional Capital Buffer Requirements for Commercial Banks within of Pillar 2".

In accordance with this rule, Pillar 2 capital requirements include requirements for unhedged currency induced credit risk buffer, which was previously integrated in Pillar 1. Unhedged Currency Risk Buffer serves as a macroprudential buffer against systemic risk caused by dollarization. Introduction of this buffer once again emphasize the intention of the National Bank of Georgia to gradually decrease banking system dollarization, which would result in more resilient banking system capable of withstanding external shocks.

It's important to note, that capital buffers under Pillar 2 should be proportionately incorporated in capital requirements (Common Equity Tier 1 4.5%, Tier 1 capital 6% and Total Regulatory Capital 8%). Therefore, 56 % of capital required under Pillar 2 should be held through Common Equity Tier 1, while 75% through Tier 1 capital instruments. For the purpose of complying with these requirements commercial banks have been given appropriate timeframes.

As a result of the amendments to capital adequacy requirements, when a commercial bank breaches new total capital requirement it will be considered that combined buffer requirement is breached first. In such case, in accordance with updated "Regulation on Capital Adequacy Requirements for Commercial Banks" distribution of own equity instruments, including distributions of dividends, are prohibited.

Furthermore, total capital requirement determined under Pillar 2 can be temporarily reduced, for maximum of one year, as a result of unexpected devaluation of currency that causes mechanical increase in risk weighted assets. Specific amount of capital by which capital requirement will be reduced must be calculated in accordance with the methodology of the bank with the approval of NBG. Commercial bank must ensure to calculate capital amount in accordance with this methodology. If commercial bank's capital is reduced more than it is defined under the methodology, bank will violate the requirement of combined buffer and it will be subject to dividend distribution and other restrictions.

Together with pillar 1 and pillar 2, Basel III framework includes the requirements relating to market discipline through pillar 3. The Governor of the National Bank of Georgia approved the decree on "Regulation on Disclosure Requirements for Commercial Banks within Pillar 3", which fully complies with Basel framework. In accordance with this new regulation, commercial banks have already published Pillar 3 quarterly reports as of June and September for the year of 2017 (see the link). These disclosures aim to improve banking sector transparency and market discipline.