In order to increase transparency and effectiveness of financial stability policy, starting from 2018 the Financial Stability Committee (FSC) moves onto the new framework. The FSC meets once a quarter according to the preannounced calendar, and after each meeting a press release is published. It will describe the current trends and challenges in the financial system, and the decisions of the committee. Moreover, twice a year committee meeting will be followed by a press conference. The first meeting of the FSC with the updated framework was held on March 1st, 2018.

The FSC regularly assesses and analyzes external risks, domestic macro-financial environment, risks related to households and companies, systemic risks of banking and non-banking sectors. Based on this analysis, the Committee makes a decision regarding the macroprudential policy instruments, such as: countercyclical capital buffer, limits on Loan-to-Value and Payment-to-Income ratios, additional capital requirements, liquidity requirements, etc.

The countercyclical capital buffer is one of the most important macroprudential policy instruments introduced within the Basel III framework. Its goal is to protect the banking sector from systemic risks arising from excessive credit growth. When the Committee assesses credit growth as excessive, the buffer will be increased in order to avoid the build-up of systemic risks. In case of risk materialization - under the financial stress - countercyclical capital buffer requirement will be reduced, which would release additional capital for banks and thus help prevent further deterioration of lending to the economy.

A countercyclical buffer is set on top of the minimum capital requirements and is determined in the range of 0%-2.5% of total risk-weighted assets. In the event of a rate increase, banks are expected to meet capital requirements within one year; however, in the event of a rate reduction, the requirements should be met immediately. In determining the countercyclical capital buffer, the Committee analyzes a number of factors, including the credit-to-GDP ratio and indicators describing its deviation from the long-run trend; trends in lending; other indicators of the financial sector's cyclical position; etc.

On March 1st, 2018 the Financial Stability Committee of the National Bank of Georgia made a decision to leave the countercyclical buffer unchanged, at 0%. According to the Committee's assessment, the total credit growth is in line with the nominal GDP growth. In 2017, the annual growth rate of loans, excluding the exchange rate effect, was 16.7%. As global and regional conditions improve, the Georgian economy continues to recover from negative external shock. According to the preliminary data, nominal GDP annual growth, owing to the increase of GDP deflator due to one-time factors, was 12% in 2017. Credit-to-GDP ratio is within 60% and is close to its long-run trend, which is estimated according to the Basel methodology. The Committee considers that it is important to have a credit growth that is in line with economic activity and supports sustainable growth of the economy and the welfare of society, without accumulating excessive financial stability risks. 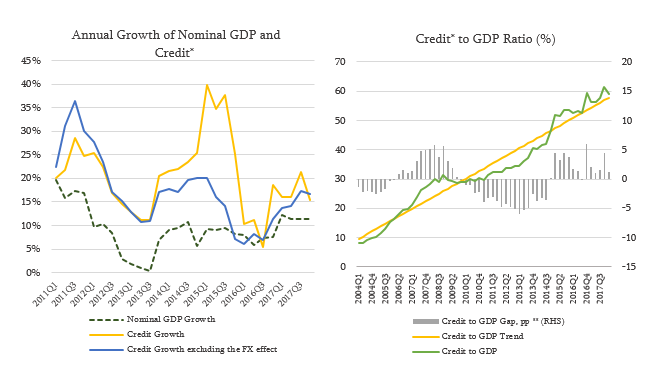 ** Credit-to-GDP gap is the deviation of Credit-to-GDP ratio from its long-run trend. The trend is estimated using HP filter in line with the Basel recommendations.

In December 2017, within the Basel III framework new norms of capital adequacy have been introduced, which set stricter requirements on capital quality and amount. In addition, capital buffers have been introduced, which are expected to be met by using Common Tier 1 capital. Additional capital buffer (systemic buffer) has been set for systemically important banks. Consequently, these changes facilitate increasing capitalization and lowering leverage. It should be noted that the banking sector maintains high liquidity and the share of NPLs in total credit has decreased over the recent period. Despite the decline in 2017, dollarization remains one of the main challenges for the financial sector. The Committee considers that the large share of foreign currency liabilities in the total bank financing requires attention amid increasing foreign interest rates. However, it should be noted that the banking sector also maintains high liquidity in foreign currency. In 2017, in accordance with Basel standards, the NBG set a liquidity coverage ratio (LCR) for commercial banks to ensure their resilience to liquidity shocks.

The household debt continues to grow at a rapid pace, which requires attention from the perspective of households' over-indebtedness.  As of January 2018, household debt is 32% of gross domestic product and is close to the median of similar indicators of comparable countries. However, it should be noted that this indicator has been increasing rapidly in recent years. Especially important is the increase in the share of households, which have high credit burden relative to their income. In general, with the development of the country, household debt-to-GDP ratio is expected to increase, but it is important that the growth rate is moderate and does not create excessive financial burden for society. It should be noted that high household indebtedness has become one of the major challenges for financial stability around the world in recent years. Increased demand from households, which is the result of global economic recovery, and easier access to credit have contributed to the household indebtedness. Generally, household credit growth contributes to economic growth and wellbeing of society, but after some point the benefits decrease and excessive household indebtedness may create financial stability risks.

Households should have an access to credit, but it is important to establish the responsible lending practice. A number of actions have been taken in that direction. In particular, in 2017 the limit was introduced on the maximum effective interest rate, the loans in foreign currency up to 100,000 GEL were banned [1] and capital requirements were increased for banks on lower credit standard loans [2]. Besides, a number of consumer protection measures were taken[3],[4],[5]. Since January 2018, new legislation has been enacted to expand the NBG's supervisory authority. In order to establish responsible lending practice, the Committee decided on launching responsible lending framework in line with the best international practice. Within this framework, limits will be introduced on PTI and LTV and the corresponding changes will be implemented to expand those regulations on non-banking sector as well.

Corporate credit growth is moderate. In 2017, the growth of corporate credit issued by banks was 12.1%, excluding the exchange rate effect. However, in case of corporates, alternative sources of financing, such as foreign direct loans and corporate bonds, should also be taken into account. According to December 2017 data, the share of foreign direct financing in the total corporate credit is 52% and the share of bonds is 1.4%. It should be noted that the corporate bond market is characterized by rapid growth since 2016 and is expected to increase further in line with the capital market development. As the economy recovers from the external shock, financial conditions of the companies improve, which is reflected in the reduction of NPLs.

The National Bank of Georgia continues to monitor the country's financial stability, assess domestic and foreign risks and, if necessary, will use all available instruments to minimize possible risks.

The Financial Stability Committee's next meeting will be held on May 23.