The Governor of the National Bank of Georgia, Koba Gvenetadze participated in Roundtable Discussions on "Supporting Better Economic Governance and efforts to curb corruption in the Middle East, North Africa, and Central Asia" organized by the International Monetary Fund, in the capital of Morocco, Rabat.

The IMF Director of Middle East and Central Asia Department, Jihad Azour opened the seminar with the presentation of the paper "Supporting Better Economic Governance and efforts to curb corruption in the Middle East, North Africa, and Central Asia" prepared by the IMF.

Koba Gvenetadze underlined the importance of the main issues indicated in the paper and discussed the reforms Georgia undertook to strengthen economic governance and reduce corruption.

"The paper provides a magnificent illustration of the main challenges in the region, and gives policy suggestions that have already proved to be a productive way for tackling and resolving those problems in Georgia, among other countries.

I would like to mention the areas that we notice the most: lower corruption means lower size of the shadow economy. Public investments projects, rightly targeted and sequenced, is probably one of the most important part of increasing potential growth rate of the real economy;  in addition, lower corruption means more accountability, which, in turn, requires transparency and increases the incentives for delivering the successful policies, including in central banking. 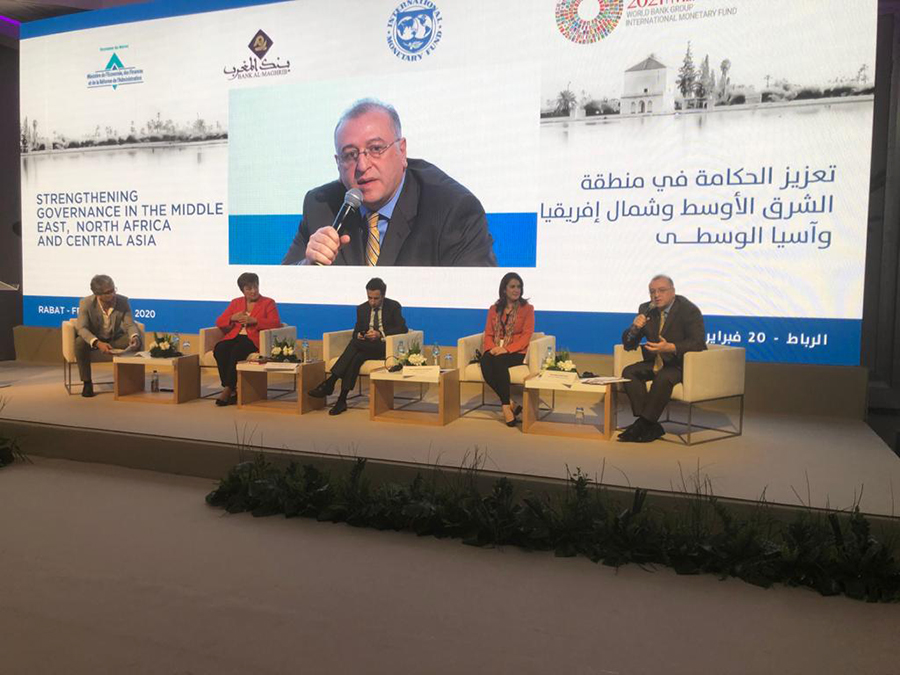 Better policies, as a result of better accountability, has again been shown to be a significant source of economic growth. This is a clear message that empirics tell us. The achievements in this respect of the Georgian authorities are clearly manifested in the dynamics of various indices reflecting investment climate in the country including but not limited to the Doing Business Indicator, where Georgia has improved from 112th place in 2006 up to 9th place in 2019; the Corruption Perception Index in which Georgia has improved from 133rd rank in 2004 up to 44th rank in 2019. Also, as a result of the improvements in fiscal transparency practices, Georgia's Open Budget Index score has improved substantially, from 34 to 82 between 2006 and 2017, with Georgia now being ranked 5th out of the 115 countries surveyed (2017 data, the report for 2020 is due this April). Also, Georgia is just has been steadily improving its sovereign rating and at the moment is just two notches away from investment grade", - stated Koba Gvenetadze.

As a result of successful and sustainable reforms, Georgia, which sees itself as an integral part of Europe, entered association agreement and the Deep and Comprehensive Free trade agreement with the EU in 2014 and, as a cherry on a cake, Georgian citizens can visit Europe freely, without visa requirements, since 2017.

During the roundtable discussion, the Governor of the National Bank of Georgia thoroughly discussed the importance of the reforms in the Central Bank, which are necessary for long-term sustainability:

"In addition to transparency, the impartial supervision and oversight of the financial sector is very important - interconnection between different parties can be a source of both moral hazard, and money laundering. In this regard, our regulations are strictly defined to any party, and are consistent with the Basel III. NBG's supervisory framework ensures determining the suitability of commercial banks' direct or indirect shareholders, the ultimate beneficial owners, and others that may exert significant influence.

In addition, we do not have any state owned bank, which significantly helps in avoiding corruption when it comes to financial intermediation. The banks that are the major source of allocating money, need to be shielded from conflicts of interest as well as moral hazard, which is difficult with a government footprint", - stated Koba Gvenetadze.

Along with the Governor of the National Bank of Georgia, the panelists of the Roundtable were the IMF Managing Director Kristalina Georgieva, Minister of Economy, Finance and Administration Reform of Morocco Mohamed Benchaâboun, Co-founder and Chairperson of Rasheed, Transparency International Sawsan Gharaibeh.

The participants of the meeting presented their perspective regarding economic and social issues, which are crucial to reduce the impact of corruption in the region. They also discussed the role of the IMF to help the countries of the region to achieve their goals and improve economic governance.