Financial Stability Committee of the National Bank of Georgia made a decision to leave the countercyclical buffer unchanged, at 0%. This requirement will remain unchanged until the end of the year. The annual growth rate of credit portfolio in April 2020, excluding the exchange rate effect, amounted to 17%. It should be noted that Credit-to-GDP ratio still exceeds its long run trend, which reflects the high credit growth and exchange rate effects in previous periods. The increased gap indicates the raised debt burden and vulnerability, especially, in the corporate sector. On the other hand, credit activity slowed down significantly after the spread of the Coronavirus and if this tendency continues, the growth of loan portfolio will be around 0%-5%. Under these circumstances, increasing the countercyclical buffer or capital buffers released in March will not be required during this year. In the future, banks will be given reasonable time to accumulate capital buffers without facing significant hardship. 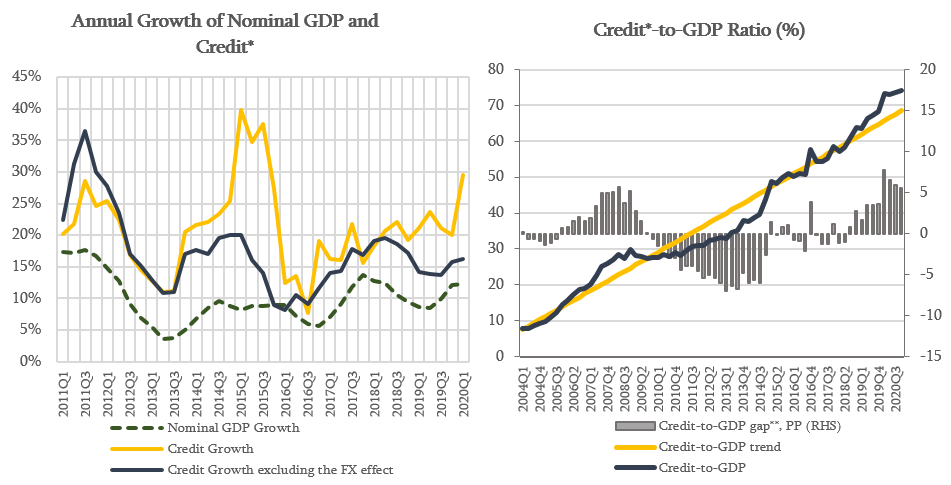 ** Credit-to-GDP gap is the deviation of Credit-to-GDP ratio from its long-run trend. The trend is estimated using HP filter in line with the Basel recommendations

The COVID-19 pandemic inflicted losses to the economy and the financial sector, however, the measures implemented by the central bank and the government significantly softened the impact of the virus. In order to maintain lending to the real economy, the National Bank of Georgia has developed a supervision plan that allows banks to use existing capital buffers. By using these buffers, financial institutions will also be able to absorb potential credit losses more easily. Additionally, liquidity management became more flexible and the provision of liquidity instruments was significantly widened, which is expected to fully offset the increased interest rates driven by the risk of liquidity deficit. It should be noted that the implemented measures are fully compliant with the recommendations of the International Monetary Fund, European Central Bank and other leading financial authorities. Furthermore, anti-crisis measures announced by the government will positively affect credit activity. In the same way, the payment moratorium programs offered by the creditors were critical to ease financial conditions of temporarily insolvent clients.

Georgian financial system maintains stability against the shock. As a result of COVID-19 pandemic, economic activity declined and risks to financial stability amplified worldwide. However, as it was stated in the previous committee's announcements, financial sector in Georgia is well prepared to face the current challenge. Profits gained in previous periods and additional capital requirements enabled banks to build up sufficient capital buffers to handle such stress. Besides, macroprudential measures implemented by the National Bank of Georgia reduced vulnerability in the non-financial sector, such as a decrease in dollarization and household indebtedness. In addition, LCR/NSFR and minimal reserve requirements contributed to solid liquidity buffer and stable financing for banks. It should be noted, that banks may end up with losses in 2020 due to an increase in loan loss reserves given significant uncertainty. However, considering stable operating income, the profitability is expected to recover soon. Non-banking sector, that also faces the prudential requirements, is stable as well.

It should be noted that currently we can better assess the magnitude of the shock. Its potential impact is already largely reflected on the financial sector. However, significant uncertainty remains, including how long the pandemic will last. The National Bank of Georgia continues monitoring the country's financial stability and assessing domestic and foreign risks. If necessary, it will use all available instruments to minimize the possible risks.

The Financial Stability Committee's next meeting will be held on September 30, 2020.