EBRD Bonds Were Placed at the Georgian Stock Exchange

The EBRD bonds will be placed at the Georgian Stock Exchange. Mr. Koba Gvenetadze, Governor of the National Bank of Georgia and Mr. Bruno Balvanera, Director for Caucasus Moldova and Belarus European Bank for Reconstruction and Development (EBRD) stated during the joint briefing.

The European Bank for Reconstruction and Development (EBRD) issued on Friday 17 June 2016 its first public bond for 107 million Georgian lari. This pioneering issuance has a five-year floating rate coupon linked to the three-month CD rate issued by the National Bank of Georgia (NBG), with the initial three-month coupon set at 6.45 per cent following the NBG’s auction on Wednesday.

This is the EBRD’s third successful bond issuance in Georgian lari to be lead managed by JSC Galt & Taggart. Following an auction process, an application was made for the bond to be listed on the Georgian Stock Exchange.

Since the EBRD’s inaugural private placement of the first ever domestic Georgian lari bond by an international financial institution (“IFI”) on the local market in March 2014, the EBRD has been working with the regulators, and in particular the NBG, to introduce regulatory changes to take account of its supranational structure and to recognise the specificities of an IFI, thus ensuring that all the requirements for public offerings in the domestic market can be met, including listing the bonds on the Georgian Stock Exchange. 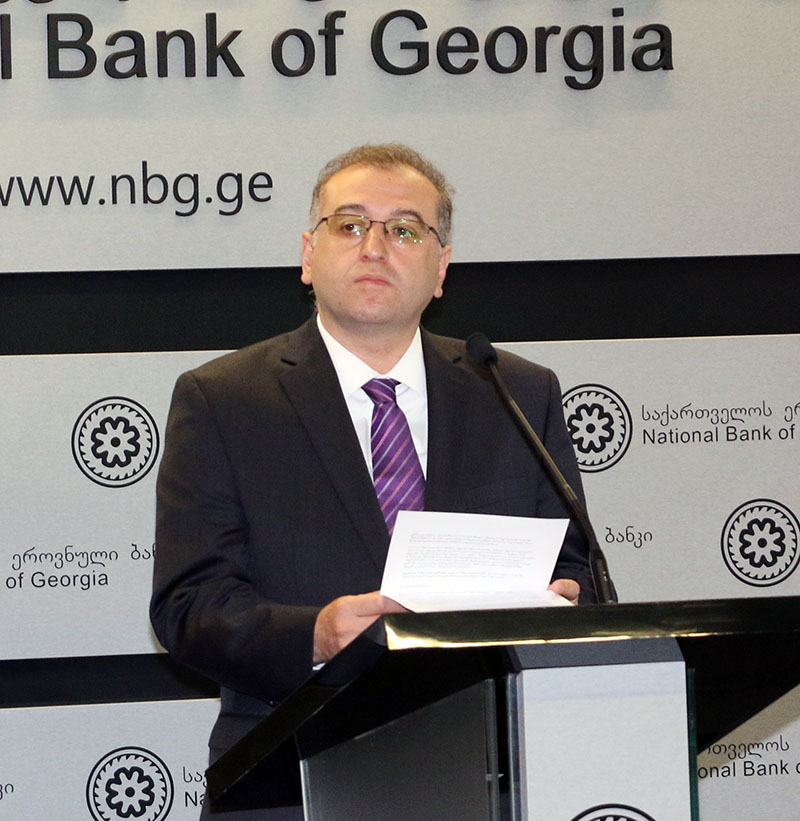 “We welcome this new milestone in the development of the Georgian capital markets that EBRD’s successful placement of the first public lari-denominated bond issuance by an international organisation represents. This event highlights trust in the Georgian lari and in domestic policies. The fact that there is a floating exchange rate in the country increases trust in the national currency and the interest of investors accordingly including the non-resident investors. We see recent growing demand on lari denominated bonds which makes impact on interest rates. I would like to thank all who was involved in this process from the EBRD, the Government of Georgia and the National Bank of Georgia as well,  - Koba Gvenetadze, the NBG Governor stated.

Thank you very much Governor for the successful cooperation, thank all of you for being here. The EBRD uses every effort for the development of the local currency. We are very pleased with the close cooperation with the central bank, the ministry of finance, with the banking sector and business community. This new issuance of 5 years bond is innovative, the previous were 2 years, the second feature is that this is the public listed deal. These bonds will make it possible to fund investment for the development of small and medium enterprises, adopting the DSFTA. It is the innovation and the Galt&Taggart has become the “go-to” provider of placement. I would like to thank the representatives of this company and everyone who was involved in the process of issuance” – stated Bruno Balvanera, the Regional Director of the EBRD.

For many years, the EBRD has sought to address the problems of excessive reliance on foreign capital and foreign exchange borrowing in emerging economies by encouraging borrowing in local currency as well as developing or strengthening local capital markets. The new bond issuance not only represents another step forward in the development of the local capital market but is also important in furthering the EBRD’s local currency lending programme in Georgia which started in December 2009.

The proceeds of all three of EBRD’s lari bonds are directed to key domestic projects. The EBRD has extended 16 lari-denominated loans for a total of approximately GEL 380 million, which include operations for small businesses, energy efficiency and women in business programmes.

The EBRD is a leading institutional investor in Georgia. Since the start of its operations in the country, the Bank has invested over €2.7 billion in 195 projects in the financial, corporate, infrastructure and energy sectors, with 90 per cent of these investments in the private sector.

Strengthening economic resilience, promoting integration and addressing global and regional challenges are the EBRD’s key priorities under the Bank’s Strategic Implementation Plan for the period 2016 – 2018.